The little taxidermist in training.

I spent last week visiting family in Rhode Island. One night over dinner my mom announced that she had been “cleaning out the attic” by which she meant filling a dumpster. I looked at my mother, said a prayer and asked “you didn’t throw out the mouse house, did you??”

I have been thinking about that mouse house quite a bit of late. You see, as a child I HATED dolls and really loved stuffed animals (surprising, I know). When Santa presented me with a doll one Christmas I sobbed uncontrollably for an hour “doesn’t Santa know I don’t like dolls???!!!” The next year, my mom got smart and constructed a toy which could not lose. I present to you the mouse house. It is intended to look like a hollowed out tree. It comes complete with shag carpeting and 70s era wallpaper. It is probably the greatest Christmas gift I have ever received. As a bonus, it is populated by small handmade mice which are covered in actual fur. What kind of fur you ask? I have no idea but I am pretty sure these babies were inspired by Walter Potter. They were made in Germany by someone who was clearly both brilliant and kind of creepy – two qualities I support wholeheartedly. I will allow the photos to do the rest of the explaining: 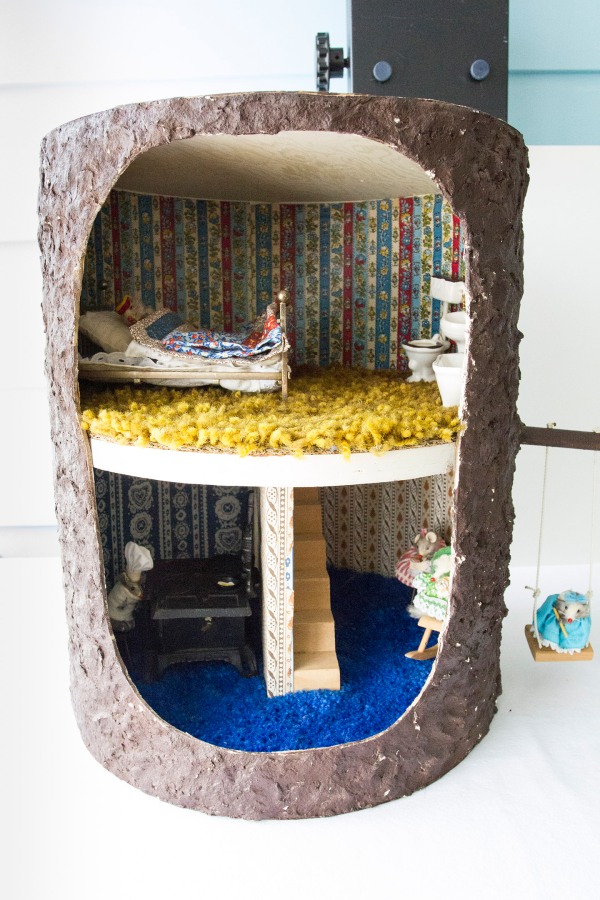 Here it is! Look at those fabulous rugs.

Here is the entire family in all their glory.

As you can see, they have taken a bit of damage from years in the attic. I think this guy is meant to be a golfer. Sadly, he lost his clubs and some of his mystery fur.

The dollhouse is filled with all of the necessary accoutrements. It looks as if someone had some sticky fingers and pilfered some of the silver.

I think it is pretty clear how this story is going to end. 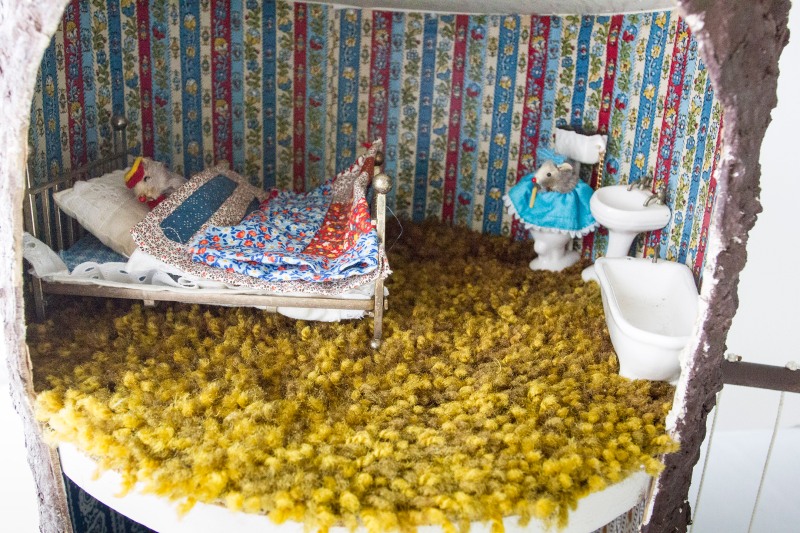 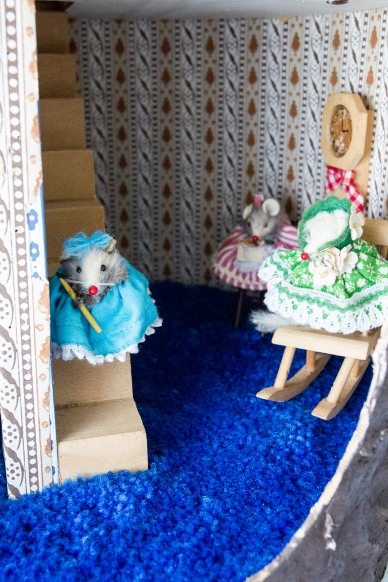 Downstairs the ladies are waiting for the mouse chef to prepare a meal.

As a final side note, my niece Sage played with this for years. I am just waiting to see how that turns out.

Yes, that’s me.  Since I graduated from taxidermy school in June, it has become abundantly clear to me that all of my friends and relations have been concealing a burning passion for all things taxidermied.  There is no other explanation for the sheer number of emails, facebook links and text messages I receive letting me know about great ideas for new taxidermy pieces, taxidermy gone horribly awry, taxidermy gifts I might like. . .   I am thrilled to act as an outlet for your taxidermy passions.  By all means, continue to send your discoveries my way.

I share with you a few of the highlights (in no particular order):

1.  That taxidermy chess set.  Yeah, you know the one.  It is made up of white mice and black mice and it can be custom made for just for you.

I fear some of the mice may have a thyroid problem of some ilk as their eyes are really bugging out of their heads.  That having been said, Walter Potter would be proud.  Don’t know who Walter Potter is?  Not to worry, I am getting to that.  If you want to order one of these fabulous sets, you can do so here:

They are hand made in Pensacola Florida using mice purchased from a snake feed supplier.  Speaking of snakes. . .

chipmunk riding a snake. What can you really say?

This is frequently suggested as something I might either enjoy as a gift or perhaps reproduce in my studio.  I really have no words to describe this, which is saying something.

3. All things Walter Potter.  For those of you who may not know, Walter Potter was the father of “anthropomorphic taxidermy.”  Here are a few examples (first, a picture of the man himself): 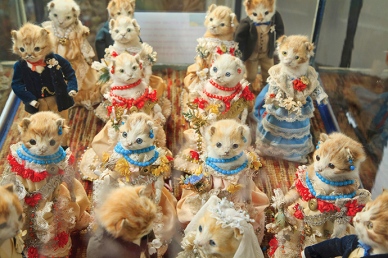 Guests at the Kitten’s wedding.

The kitten wedding shown above is one of the most famous of Potter’s works.  I would rather not ponder where one would obtain such a vast number of dead kittens but the result is simultaneously cute, funny and completely terrifying.  Other famous works include the bunny school (so many dead bunnies!) and the kitten tea party. His most famous work is called “The Death of Cock Robin” it is based upon a popular British children’s book.  A book and film about Potter’s work have recently been created.  You can view a teaser for the film here:

Sadly, Potter’s collection which had been housed in one museum was recently sold at auction.  Damien Hirst reportedly offered over 1 million pounds for the entire collection, his bid was turned down by the auction house resulting in a law suit.